Your period may change dramatically during the menopause transition. There may be changes in length between cycles, amount of flow, and how many days you bleed each time.

Bleeding tends to be heavier, and may require many more pad/tampon changes. Wearing 2 tampons (don’t forget you placed 2!) with a panty liner for insurance on gusher days helps. You may bleed for more days in a row, too. It can be very annoying. But, conversely, flows can be lighter for some women.

Not every woman notices changes in the amount of flow. For some, their period may skip a few months every now and then, until one day they realize it’s stopped.

WHAT’S HAPPENING TO MY BODY?

Before the menopause transition, hormone levels rise and fall in a regular pattern. This prepares the uterus for pregnancy. If pregnancy doesn’t happen the lining is released as a period. During the menopause transition, hormone patterns become irregular. There are more or fewer days between periods, skipped periods, and the amount of blood may be lighter or heavier than normal.

These changes in cycle length are normal. If the intervals are not less than 21 days, and the bleeding pattern is not bothersome, irregular bleeding does not need treatment.

Women with periods less than 21 days apart (the time from the start of one period to the next) are at risk for endometrial precancer. They should see their health care provider. An endometrial biopsy will likely be done.

Heavy bleeding doesn’t mean there is a a problem. It can be bothersome. There may be a feeling of pressure or heaviness in the lower abdomen, particularly in women with uterine fibroids.

On the other hand, heavy bleeding can cause anemia, need for transfusion and in rare circumstances, hysterectomy. It can be a sign of endometrial precancer or cancer.

Contact your healthcare provider if  you have any of the bleeding changes described below:

Hormonal and other therapies can help manage heavy bleeding:

THESE TREATMENTS MAY HELP, BUT WE NEED MORE RESEARCH

RESEARCH SHOWS THIS TREATMENT IS RISKY

Treatments that are inappropriate or have not been studied for this symptom are not listed. 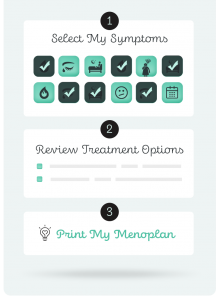 Copyright My Menoplan | All Rights Reserved © 2020