We, the scientists and clinicians who created MyMenoPlan, have carefully evaluated the scientific literature to develop our recommendations.

HOW CERTAIN ARE WE? GRADING THE EVIDENCE

We give the evidence in each area a grade, based on how certain we are that it helps, in ineffective, or hurts people. You’ll see the following in your Menoplan, and on the symptom and treatment pages.

BASING OUR ADVICE ON THE BEST SCIENCE

The MyMenoPlan research team is committed to giving you the best available advice based on the highest quality research. What does that really mean?

Scientists use statistics to judge whether a treatment really works. But sometimes statistically significant effects are so small that a woman wouldn’t really notice. The degree of impact should matter to the sufferer. Doctors talk about whether the impact is clinically meaningful. You should feel at least a little better from the treatment.

We looked at all the research about the treatments. No cherry picking which studies to pay attention to because we’re rooting for a treatment we personally like. This is why you should not jump when the news reports one new study. It’s only that – one new study. It needs to be considered along with all the other studies in an area.

One way we judge the research quality is using techniques that combine the findings of many studies. This is called a meta-analysis or systematic review. For many of the treatments we write about, there have been meta-analyses telling us whether the treatment works, for whom, and how strong the effect is on average. If averaging the results of all the studies finds that a treatment improves a symptom, then it is a more likely to be true.

We consider how many studies there are, how big they are, whether they were randomized trials, how they chose the participants, and how they measure the results. There should be enough studies to know whether results are reliable – meaning the studies get similar results. One study is not enough to know whether a treatment works.

WHAT IS A RANDOMIZED CONTROLLED TRIAL?

There are many types of studies. Some studies are observational. That means that we compare groups based on certain traits –young people vs. older people, people who drink well water vs those who drink city water, or women with a natural menopause vs. those with a surgical menopause.

Imagine we compare the rates of disease in these groups. It may be, for example that people who drink well water are more likely to get a certain disease than those who drink city water. But there can be bias in this kind of comparison. Maybe people who drink well water are also more likely to be exposed to pesticides and it is really the pesticides that cause the disease. It is hard to account for these types of biases in observational studies.

That is why the gold standard is a randomized controlled trial. In randomized trials we take people who are eligible and want to be in the study. Then they are randomly assigned (like tossing a coin) to two or more groups. One group gets the treatment we are testing. The other group is a control group, and it gets a matching placebo treatment. We try to make the groups alike except for the treatment they get. Then we can be more confident that the treatment caused a change in the symptom. Examples of study treatments and their matching placebos or control treatments are shown below.

Do we have to use a placebo, like a sugar pill? Why can’t we just give antidepressants to women with frequent hot flashes and see what happens to their hot flashes? The problem with this is the placebo effect.

WHAT IS THE PLACEBO EFFECT?

Why is this important? Because placebos can cause real physiological changes in the brain that influence health outcomes, such as hot flashes or pain. Expectation plays a huge role in the perceived and physical response to a treatment. A person who thinks they are getting the real intervention but is given a placebo still experiences the ritual and attention involved in the intervention. The design – intervention vs placebo – means that people in both groups should have similar expectations, desires, anxiety, perceived rewards, mental cues, and emotions. 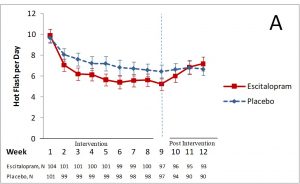 Because of strong placebo effects like the study above, we think that randomized trials of menopause treatments are critical.

Copyright My Menoplan | All Rights Reserved © 2020